Fast USB or TCP/IP interfaces as well as RS-232 are the standard interfaces supported by modern digital controllers from PI.

Beyond that, PI also offers real-time compatible interfaces such as an SPI or a 32-bit parallel input/output interface (PIO).

To establish the connection to the application environment, customer-specific serial interfaces are also possible.

In the case of analog drivers, the analog input value is amplified linearly and the output voltage is transmitted to the drive. Analog motion controllers, as still used for piezo-based positioning systems, are equipped with an analog proportional, integral, and differential (PID) controller and linearization processes through which the input voltage corresponds as close as possible to the target position. The resolution and process time thus depend directly on the components used and allow subnanometer motion and real-time command.

Many of the PI digital motion controllers are also equipped with analog interfaces which can be used for external sensors or as a source for generating a position value. To achieve the real-time ability and resolution of an analog controller, PI employs fast processors and high-resolution 16 to 20 bit A/D converters with oversampling processes.

Analog outputs can be used as monitor of the axial position or to control an external motor drive.

In addition, PI offers an analog interface for many controls as connection to external operating elements such as joysticks. Modern PI controllers support HDI equipment for this purpose which are linked to the controller using a USB interface.

Real-time Fieldbus interfaces are often used on automated production lines. Real time means that not only the transmission itself is secured but also the chronological sequence. That means that commands reach the individual devices in exactly the same sequential and chronological order that they were transmitted.

Communication between the PLC and the Hexapod Controller

The high-level PLC operates in so-called CSP mode (Cyclic Synchronous Position Mode) and communicates with the hexapod controller via EtherCAT. As master, it specifies the target positions or trajectories of the individual axes as Cartesian target coordinates in space and also reports the actual positions back to the fieldbus interface.

All other calculations required to command the parallel-kinematic six-axis system are done by the hexapod controller, i.e., transforming the target positions from Cartesian target coordinates into drive commands for the individual drives. On the bus, the hexapod system acts as an intelligent multi-axis drive.

By using standardized real-time Ethernet protocols and moving the transformation calculations to the hexapod controller, the user is not dependent in a specific PLC manufacturer.

Serial data transfer using the SPI is mainly intended for transmitting digitalized position values from the PI controller and control signals to the PI controller. Transmission is with marginal delay and update rates which correspond to the servo cycle times of the controller.

Here, the standard command interpreter for the PI General Command Set (GCS) can be bypassed, thus making conversion of the commands obsolete. This is of special interest for users if own digital signals are to be integrated real time for target values.

Alternatively, GCS commands can also be transmitted, so giving access to all the functions of the controller. In addition to linking external controls, the PI SPIs are also used for internal data transmission between the controller and mechanical elements.

Quickly receive an answer to your question by email or phone from a local PI sales engineer.

Modular Controller for up to 6 Axes for Highest Precision 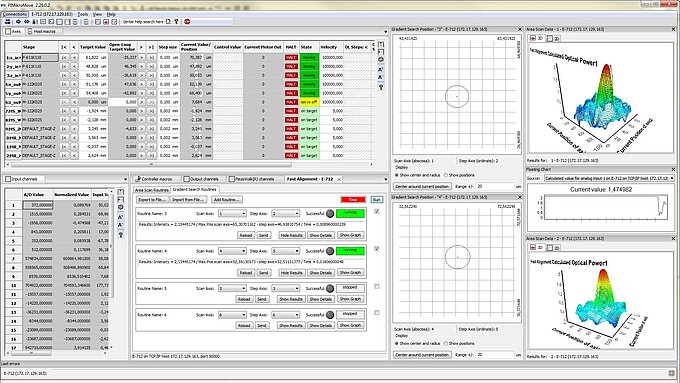